In 1935, a gentleman called Alonzo Church came up with a simple scheme that could compute…just about anything. His scheme was called Lambda Calculus. It was a phenomenal innovation, given that there weren’t even computers for him to test out his ideas. Even cooler is that those very ideas affect us today: anytime you use a function, you owe a hat tip to Mr. Church.

Lambda Calculus is so cool that many hackers use it as their secret handshake — a “discreet signal” if you will. The most famous, of course, is PG’s Y Combinator. In this essay, we’ll find out what it’s all about, and do things with functions that we’d never have imagined. In the end you’ll have built just about every programming concept: numbers, booleans, you name it…just with functions.

City dwellers who drive SUVs rarely consider their cars as ferocious machines that traverse rocky deserts and flooded rivers. It’s the same with programmers and functions. Here’s what we think functions do:

Safe, clean, and useful. We’re so accustomed that it would surprise us to find the myriad of ways we can bend functions to do just about anything.

Let’s step out into the wilderness a bit. Say you wanted to make a data structure for pairs:

How would you do it? It’s sensible to use a map or a class or a record to represent a pair. But…you could use functions too.

Here’s one way we can make a pair:

No maps or classes…it just returns a function!

Now our ex-pair takes a selector argument. What if we ran ex-pair with this selector:

Which would return… a!

That just gave us the first value of our pair! We can use that to write a church-first function:

And do something similar for second:

We just used functions to represent pairs. Now, since the grammar for Lisp is just a bunch of pairs plopped together, that also means we can represent the grammar of Lisp…with just functions!

What we just did was analogous to a city dweller driving their SUV…on a snowy day. It gets a lot crazier.

We said we could represent everything. Let’s go ahead and try it!

Here’s what can do. Let’s take a function we know and love, and implement it from top-to-bottom in Lambda Calculus.

By the end of this essay, we’ll have built factorial, only with functions.

To do this, I want to come up front and say I am cheating a little bit. In Church’s Lambda Calculus, there is no def, and all functions take one argument. Here’s all he says: 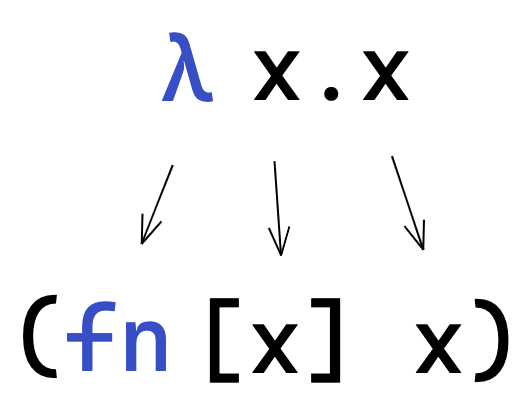 In his rules, you define anonymous functions by popping a little λ in front. What follows is the argument, following by a . .After the . is the application.

This is very much akin to a single-argument anonymous function in Clojure: λ x. x => (fn [x] x)

We could follow those rules, but writing factorial like that is going to get hard to reason about very quickly. Let’s tweak the rules just a little bit. The changes won’t affect the essence of Lambda Calculus but will make it easier for us to think about our code. Here it goes:

1) for a single argument function, (fn [x] x) maps pretty well to Church’s encoding. We can go ahead and use it as is.

2) Since Church’s lambdas only take one argument, For him to express a function with two arguments, he has to write two anonymous functions:

This would map to:

But, nesting our functions like this can get annoying in Clojure [1]. To make life easier for us, we’ll allow for multi-argument functions:

3) Finally, Church has no concepts of variables outside of what’s provided by a function definition.

For him to express

He would have to “unwrap” make-pair

To keep our code sane, we’ll allow for def, but with one rule:

You can use def , as long as you can “replace” it with an anonymous function and nothing breaks.

For example, imagine if make-pair referenced itself:

This would break because if we replaced (def make-pair …) with an anonymous function, there would be no variable called make-pair anymore!

That’s it, these are our rules. With that, we’re ready to make factorial!

The first thing we need is the concept of a number. How can we do that?

Church thought of a pretty cool idea. What if “numbers”, were higher-order functions with two arguments: a function f, and a value v.

We can figure out what number each function represents by “counting” the number of times f was composed.

To help us see these numbers in our REPL, let’s create a quick converter function:

Since a church numeral composes f the number of times it is called with v as the first argument, all we need to see what number it is in Clojure, is to provide inc as f and 0 as v! Now 2 would do (inc (inc 0)) for example, and get us the corresponding Clojure number.

Take a look at how we wrote two:

What we did here, is delegate f’s composition to the numeral before (in this case one ), and then just called f one more time.

What if we abstracted the one out?

Voila. Give this function a numeral, and it will return a new numeral that calls f one more time. We’ve just discovered inc!

Now that we have this function, we can also write a quick helper to translate Clojure numbers to these numbers:

That’ll come in handy for our REPL.

To do that, we’ll need to go on a short diversion.

Remember our pair data structure? Let’s create a function for it (we’ll use this in just a moment below): shift-and-inc. All it would do, is take pair of numbers, and “shift” the pair forward by one:

Bam, we take a pair. The second item is shifted over to the first positions and is replaced with its inced friend. Let’s try it out:

7: Dec: putting it together

Now that we have shift-and-inc, what if we did this:

Our result would be the pair (N-1, N). This means that if we take the first part of our pair, we have dec!

Next up, multiplication. Say we multiply a by b. We’d need to produce a church numeral that composes f, a * b times. To do that, we can leverage the following idea:

Say we made a function g, which composes f b times. If we fed that function to a, it would call g, a times. If a was “2” and “b” was 3, how many times would f get composed? Well, g would be composed twice. Each time g is composed, f is composed 3 times. That comes out to a total of 6 times!

Bam, if we did that, it would represent multiplication.

We’ve got numbers, we’ve got * and we’ve got dec. Next up…booleans!

To do this, we need to be creative about what true and false is.

That’s it. Surprisingly this is enough to handle booleans. Here’s how we could convert them to Clojure bools.

Do they look familiar? Those are our selector functions for church-first and church-second! We could interchange them if we wished 😮

If you are like me, you were a bit suspicious of those booleans. Let’s put them to use and quiet our fears. Here’s how could create an if construct:

That would make if work pretty well:

We have almost all the constructs we need to implement factorial. One missing piece: zero?. We need a way to tell when a numeral is zero.

The key trick is to remember that the zero numeral never calls f.

We can use that to our advantage, and create a zero? predicate like this:

If a number is greater than zero, f would be called, which would replace v with church-false. Otherwise, we’d return the initial value of v, church-true.

Well, we have numerals, we have if, we have zero? we have *, we have dec. We could translate this:

Wow. That follows our recipe pretty much to a key.

The only weird thing is that we wrapped the when-true and when-false cases in an anonymous function. This is because our church-if is a little different than Clojure’s if. Clojure’s if only evaluates one of the when-true and when-false cases. Ours evaluates both cases, which triggers an infinite recursion. We avoid this by wrapping both cases in a lambda, which “delays” the evaluation for us. [2]

Here’s one way we can fix it. We could update this so factorial is provided as an argument to itself.

That would work, but we only punt the problem down. What the heck would ???? be? We need some way to pass a reference of factorial to itself!

14: Y-Combinator: Writing it out

Let’s see if we can do make this work. First, let’s write our factorial, that accepts some kind of “injectable” version of itself:

If we can somehow provide that factorial-cb, we’d be golden.

To do that, let’s create a make-recursable function, which accepts this injectable-f

Okay, all we did now is move the problem into this make-recursable function 😅. Bear with me.

Let’s imagine what the solution would need to look like. We’d want to call injectable-f with some factorial-cb function handles the “next call”.

That seems right. Note the comment recursion-handler . This is in reference to this form:

If we somehow had access to this form, we can use that in ????! Well, let’s punt the problem down again:

Oh ma god. What did we just do?

15: Y-Combinator: Thinking it through

Let’s walk through what happens:

The first time we called:

And recursion-handler would call itself:

So now, this function would run:

And this function’s recursion-handler argument would be…a reference to itself!

Now this would run:

injectable-factorial would be called, and it’s factorial-cb function would be this callback:

Whenever factorial-cb gets called with a new argument,

This would end up producing a new factorial function that had a factorial-cb. Then we would call that with next-arg, and keep the party going!

Hard to believe. Let’s see if it works:

This make-recursable function is also called the Y Combinator. You may have heard a lot of stuff about it, and this example may be hard to follow. If you want to learn more, I recommend Jim’s keynote.

Wow, we did it. We just wrote factorial, and all we used were anonymous functions. To prove the point, let’s remove some of our rules. Here’s how our code would end up looking without any variable definitions:

Well, we just took our functions through the Mojave desert! We made numbers, booleans, arithmetic, and recursion…all from anonymous functions. I hope you had fun! If you’d like to see the code in full, take a look at the GH repo.

I’ll leave with you with some Clojure macro fun. When the time came to “replace” all our defs with anonymous functions, how did we do it?

In wimpier languages we might have needed to do some manual copy pastin [3]. In lisp, we can use macros.

First, let’s rewrite def. This version will “store” the source code of every def as metadata:

Then, we can create an unwrap function, that recursively replaces all def symbols with with their corresponding source code:

To learn about what’s going on there, check out Macros by Example

Powered by OneBlog with Netlify Graph